Sacred ritual keeps us in touch with the metaphysical, the unseen world, and sanctions right relationship with universal consciousness as a prerequisite for human happiness. The sacredness of ceremony gives us a sense of our aliveness. It touches our core on a very profound level; it relieves the emptiness and a sense of spiritual isolation. 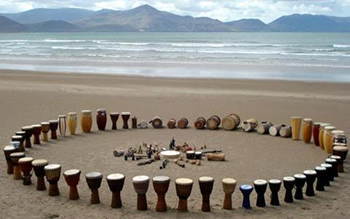 Through its magic it attunes us to the Great Mysteries which inform universal consciousness. It teaches us that we have an active part to play as co-creators in this Great Hoop called life. It reveals to us that we have the power to create our reality and that this reality becomes manifest through the mind’s creative force being engaged and activated through ritual.

Ceremony and ritual have been practiced down through the ages by primal cultures. They are among the ancient ways to lend meaning to our collective human experience. Rituals were methods through which they were able to touch creation. Our primal elders experienced ritual as an act of sacred union to the Earth Mother, the living cosmos, to self and to each other. Through this sacred union they understood that there is no concept of other, that separateness was an illusion and that there is just one circle. Ritual was used to ensure harmony within the group when there was discontinuity. Through ritual they lived the constant interaction between spirit and matter. The beating of their hearts became entrained with the motion of cosmic rhythm.